“All that was once directly lived has become mere representation.” -Guy Debord

In this work, titled Keep In Touch, I address physicality as related to human interaction, presenting two versions of information - the visual and the tactile. In a world predominantly navigated via text and imagery, we have grown accustomed to receiving information through this new and demanding language. Photographs of the human face capture a heightened sense of detail, allowing us to feel as if we have gained an understanding of a person. “To see is to know” is a notion that I am challenging in this work.

I use the sense of touch to locate information through interaction with other humans, creating a visual metaphor for psychological closeness in contrast with the growing distance between each other. It is said that we are living in a world of “connectivity.” While this is true in a sense, we are losing intimate connections and physical communication, resulting in an increasingly touch-averse culture. By asking individuals who are blind to describe a physical appearance through use of touch, this work explores the crossing of cultural boundaries, while also revealing new understandings about both individuals involved. Visually, the face is understood as a whole, whereas they describe it in fragments. The close-up images of the face with text explore the tactile interaction, while presenting the heightened photographic representation.

Our skin is our canvas and reveals much of our identity – from age and experience to personal expression via alteration and modification. It is the outer-most link between our selves and the world, and the revealer and receiver of sensations connected to inner emotions.

The images with braille constructed out of pearls create a visually tactile experience for the viewer. This is done through the use of photography to present an illusion of texture and emphasis on the importance of color, creating powerful visuals of the female’s most noticeable feature. This visual information becomes over powered by the physical language, revealing this other version of information, and is only achieved through physical interaction.

It is the pairing of these senses then; the photographic detail and the explorative and intimate nature of touch with which I create a synesthetic experience for the viewer. This is to provoke questions of what is becoming lost with the distancing of human intimacy and a reflection on gathering information through alternate forms of communication. 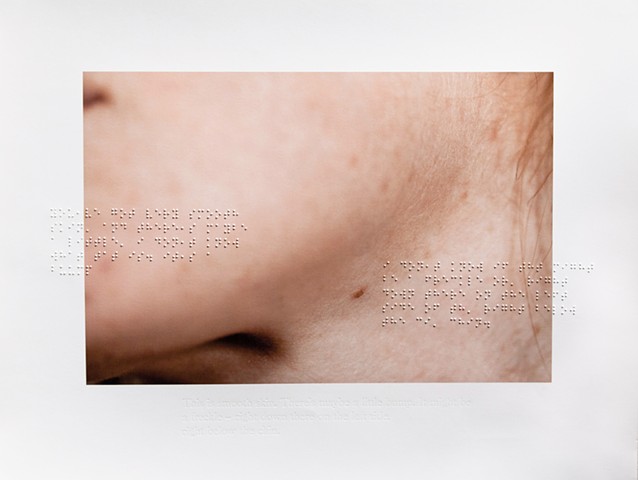 "This is smooth skin. There's maybe a little bump. It might be a freckle -- right down there on the left side, right below the chin."
Archival Inkjet Print, Embossed Braille, Debossed text, Watercolor
15x19 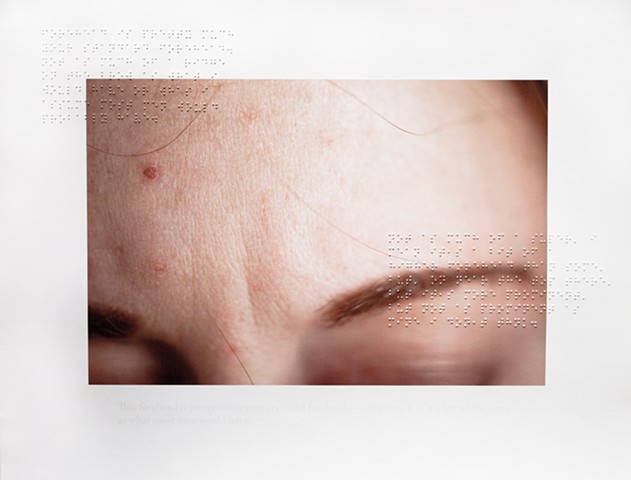 "This forehead is pretty much your standard forehead -- not as much of a ridge on the brow as most men would have."
Archival Inkjet Print, Embossed Braille, Debossed text, Watercolor
15x19 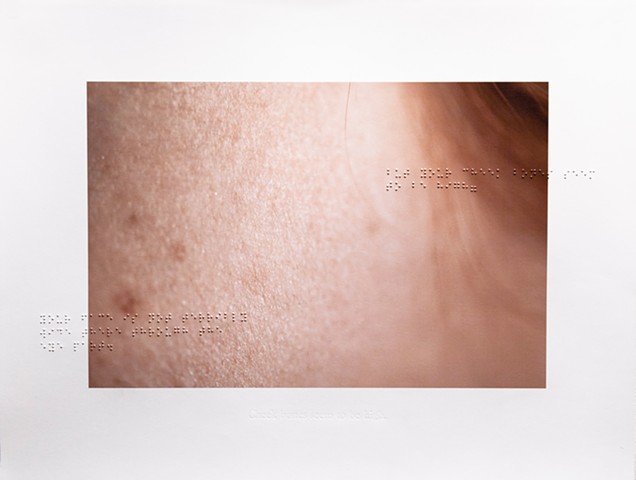 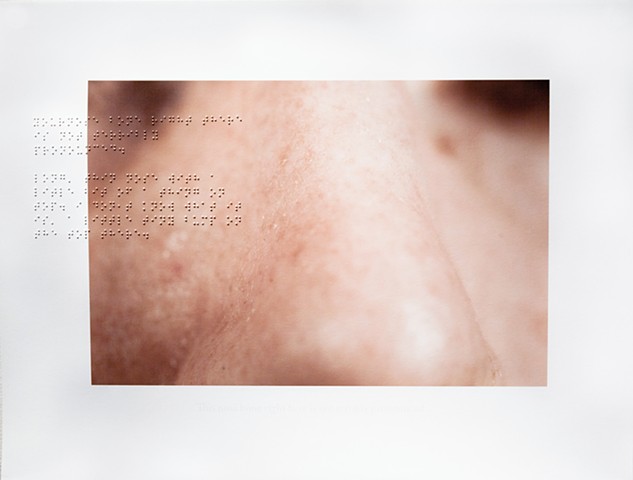 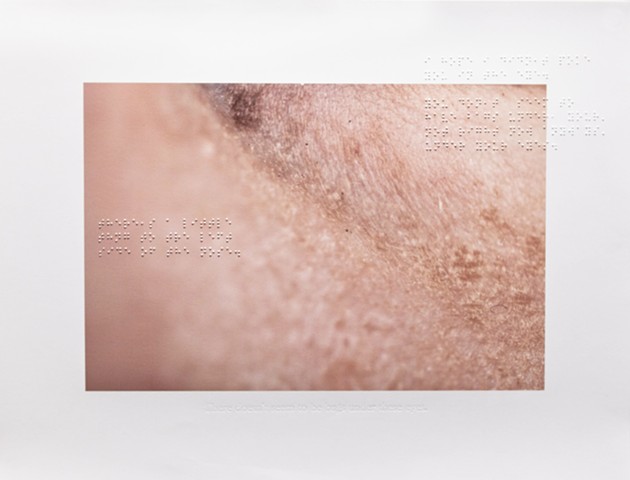 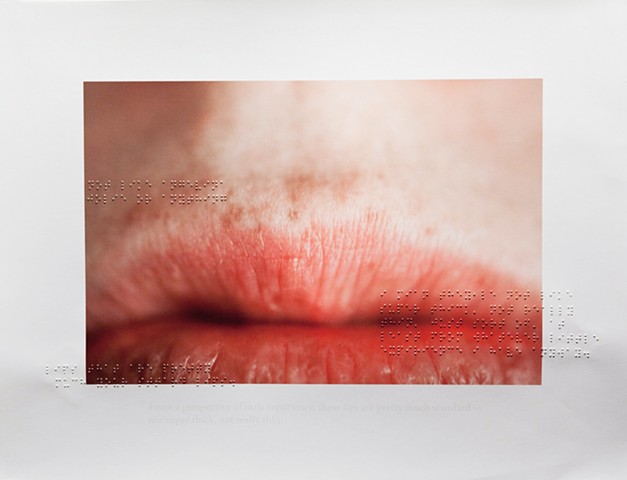 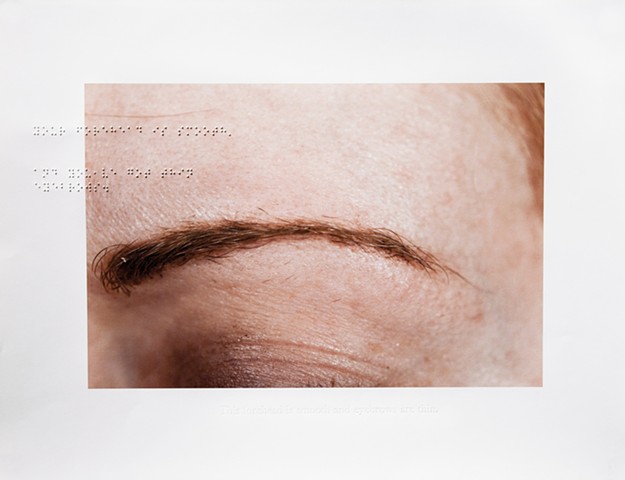 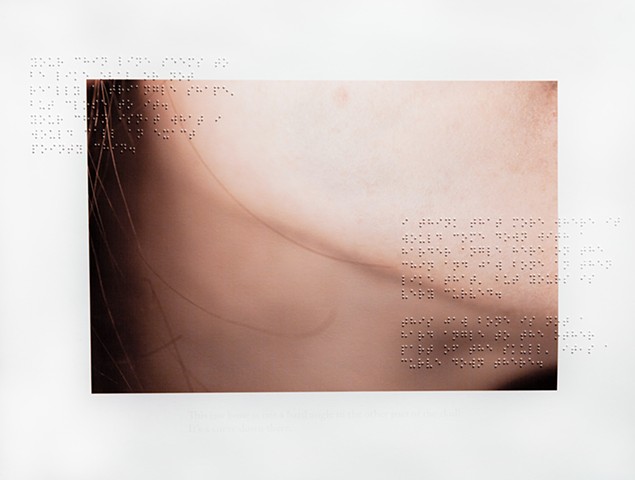 "This jaw bone is not a hard angle to the other part of the skull. It's a curve down there."
Archival Inkjet Print, Embossed Braille, Debossed text, Watercolor
15x19 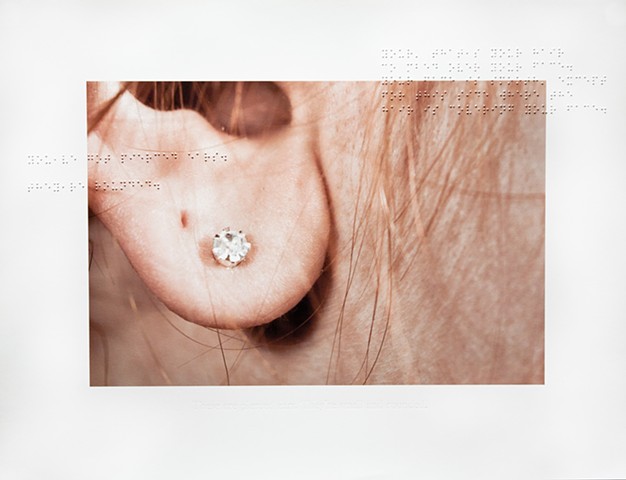 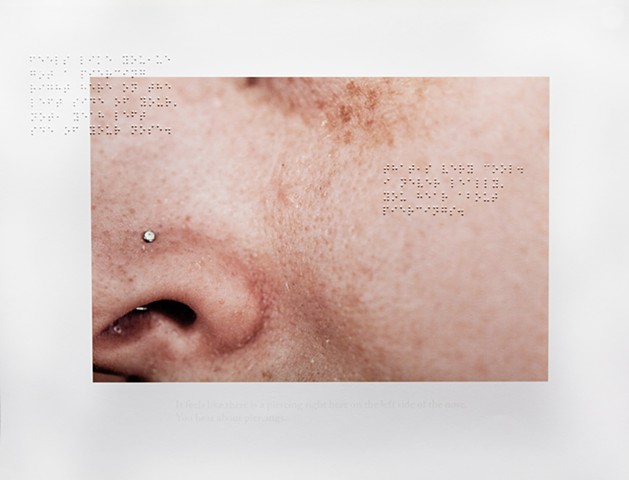 "It feels like there is a piercing right here on the left side of the nose. You hear about piercings."
Archival Inkjet Print, Embossed Braille, Debossed text, Watercolor
15x19 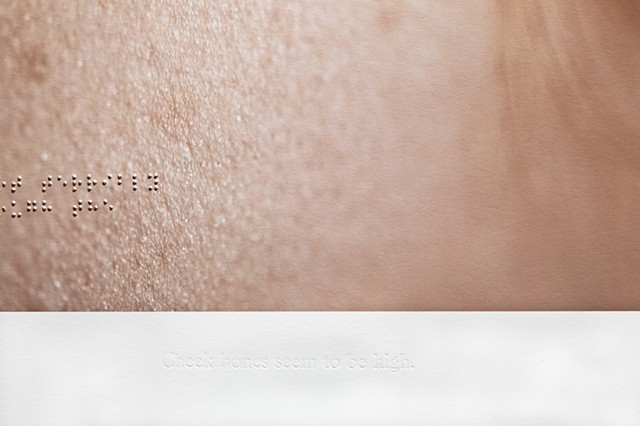 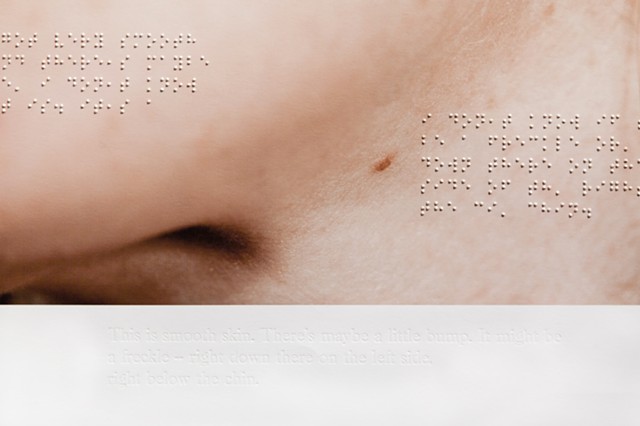 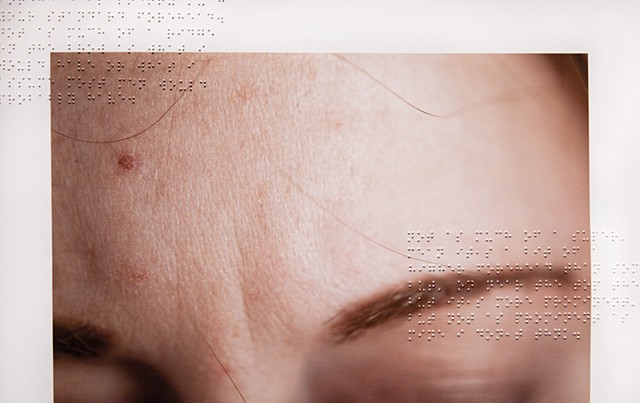 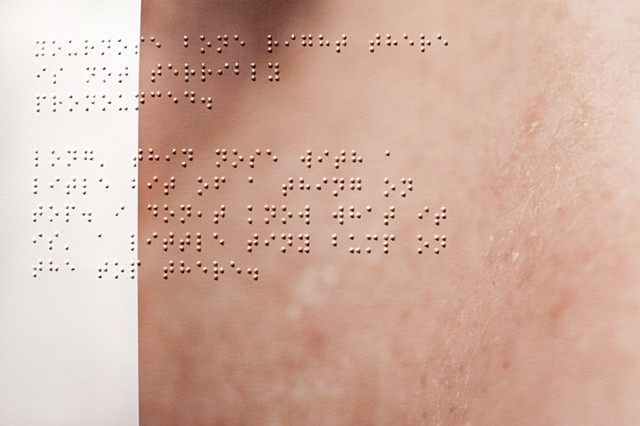 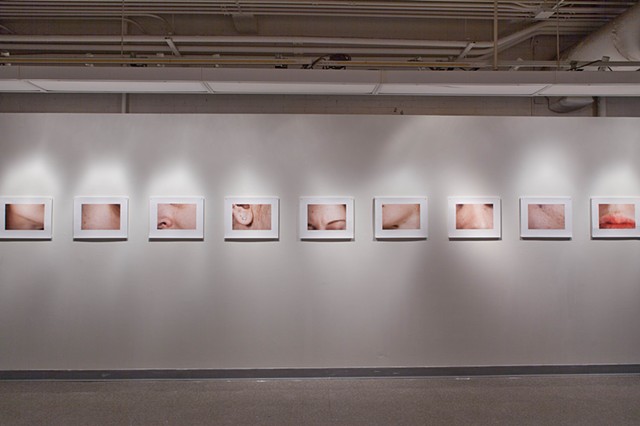 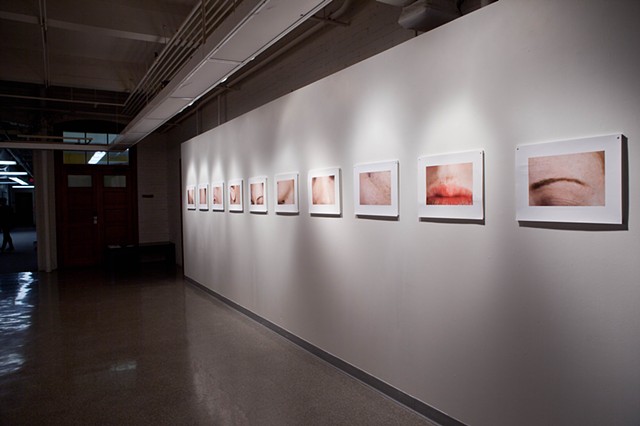 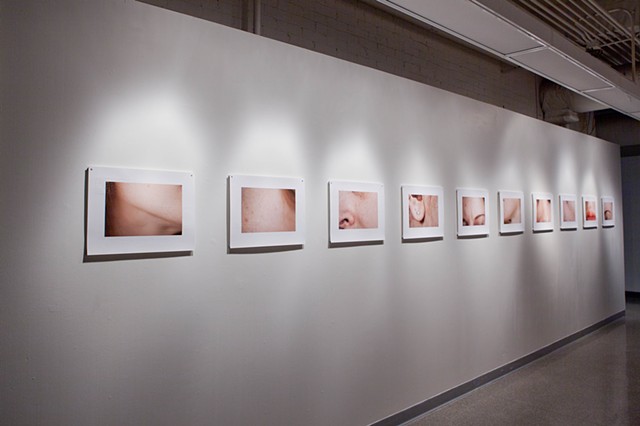 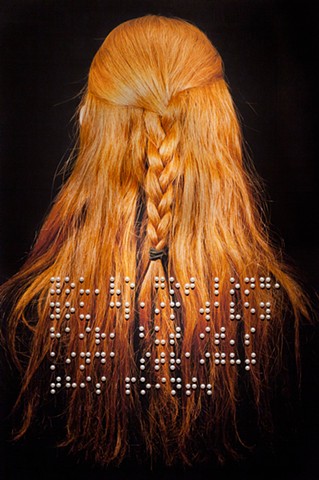 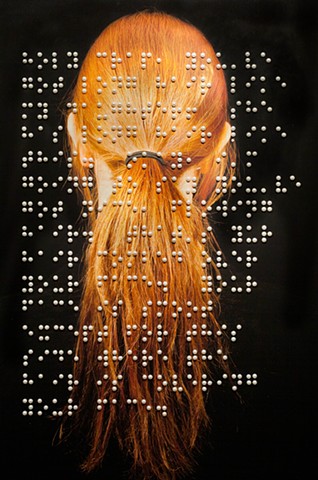 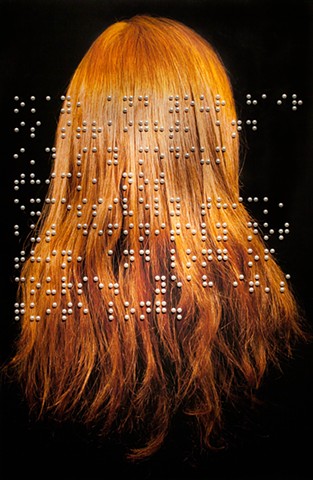 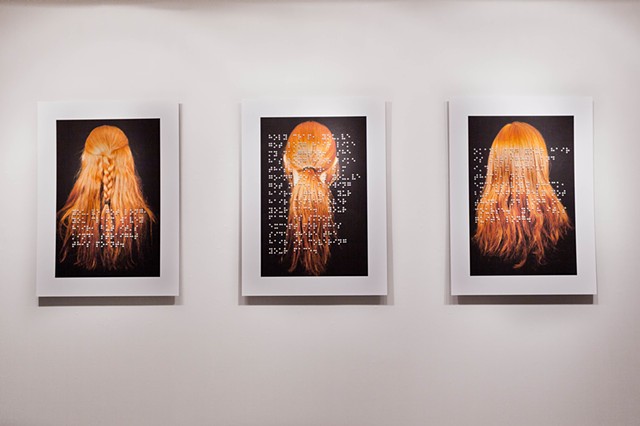 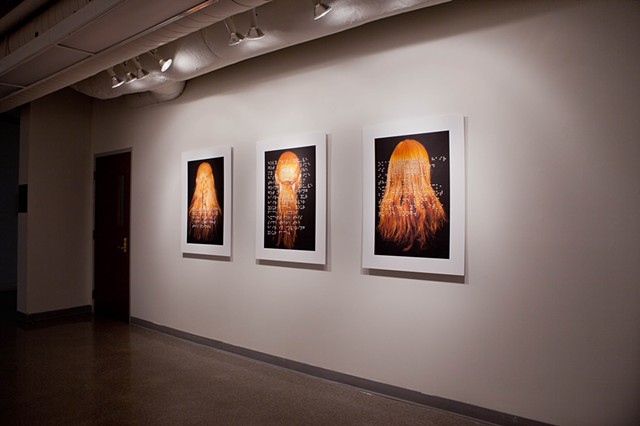 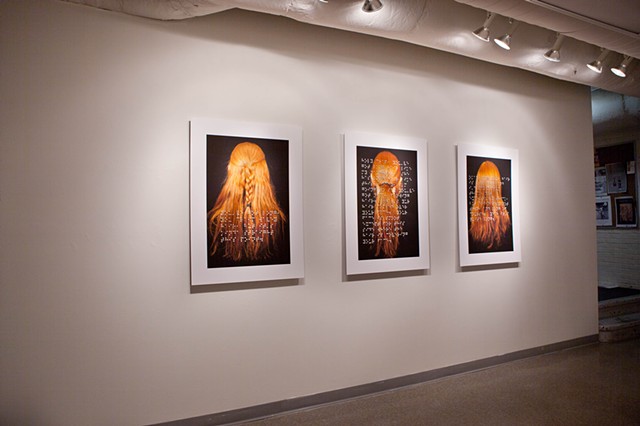